Atland Ventures provides an excellent opportunity for students to further their personal and professional goals. Fund members, no matter their interest of major, gain invaluable tangible and intangible skills, as highlighted by many of our alumni.

I had the pleasure of interviewing Governess Simpson to get a better idea of the great things she went on to do after graduation, and the role that Atland played in getting her to those milestones. 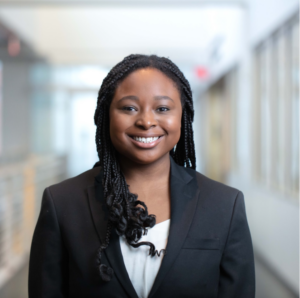 Governess Simpson graduated in 2022 with a degree in Industrial Systems Engineering and a minor in Computer Science. Coming into Atland Ventures in the Spring of 2019 as a non-business major, Simpson’s goal was to become more well-rounded. “I knew nothing about entrepreneurship coming in,” Simpson said. “I did not have that type of background; I was very much math and science.” She found that Atland was teaching a completely different side of entrepreneurship and Venture Capital that was not taught in the classroom. She later became VP of IT and Operations and transitioned into a director role soon after.

Simpson is currently doing a fellowship with the Internal Revenue Service (IRS) as a product manager. She is working with her Information Technology Digital Transformation team to make the IRS more digitized. Following her fellowship, Simpson will begin her full-time job as a Forward Deployed Engineer at Palantir Technologies in New York.

Atland was the ideal opportunity for Simpson to meet and learn from people not within STEM. It exposed Simpson to motivated individuals as well as various facets of business, such as competitive analysis and financial modeling. Being in the fund even sparked her interest in entrepreneurship. “Maybe I want to run my own startup one day when I’m older and have more experience,” Simpson said. She went on to talk about her fascination with startups in the tech space. Many of the companies that came through Atland during Simpson’s time in the fund were tech-focused, which she found valuable, as it also encouraged her to learn about innovations that are currently in the space.

Simpson believes that Atland helped her get to where she is by expanding her horizons and transforming her mentality. “It really changed my trajectory from being run-of-the-mill, general engineer, senior staff,” Simpson said. “It really allowed me to say okay, maybe I don’t really want to be just an engineer; maybe I want to look into taking a more leadership role; maybe I want to be involved in the business and administrative side.”

Even more than expanding her horizons, Simpson learned a crucial skill: how to speak up. During her first Atland meeting, Simpson watched other analysts raise their hands to ask questions and add insights during the discussion. She sat quietly, and became overwhelmed with imposter syndrome. “I felt like I didn’t have the skills to contribute,” Simpson said. “ I felt very embarrassed.” She explains that when given a prompt or asked a question, she has to let it sink in before responding and felt a lack of confidence as a result. However, by being in an environment like Atland that encouraged sharing opinions and leading discussions, Simpson realized what she now claims as the most tangible skill Atland gave to her: “Even though you don’t have to know everything, you do have to put yourself out there,” Simpson said. This, she notes, helped her a lot with her career.

For Simpson, today is nothing like her first Atland discussion. “When I walk into a room now, and they’re asking questions, even if I don’t feel 100% confident about it or I’m losing context,  I don’t feel afraid to just speak up and share my voice,” Simpson said. “That’s really helped me become more recognized as a leader in the space.”

“Everyone was in such high spirits. I didn’t know anybody, but we were all still able to bond.”